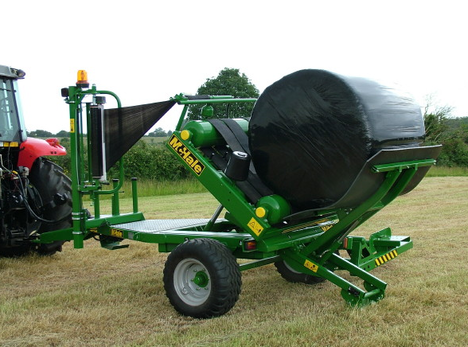 For the medium to high producer, there is a single round bale wrapper that stands out among the pack, the McHale 991 wrapper series. These are trailed units that come in either cable controlled with 4 levers (991 BC) or with fully electronic in tractor settings (991 BE). The McHale 991 single bale wrappers are self-loading, and have a high output rating for producers who need to wrap bales fast and efficiently.
The McHale 991 single round bale wrapper has several patented features that are unique to McHale. The first is the multiple control options. If you get the 991BE you are getting a fully electronic machine with a computer screen in the cab, if you go for the 991BC, you get the 4 lever cable control feature that is also easy to use.
The McHale 991 series has a patented ground supported bale damper system that softly places the finished, wrapped bale back on the ground and if you wish to place it vertical there is a side tip option that is switched with the placement of a pin, for easy side tipping.
The McHale 991 has a heavy duty chassis and lift arm for loading the bales onto. This has been tested over the past 15 years by McHale. Many McHale customers have wrapped 150,000 bales and customers have been happy with the way this heavy-duty bale wrapper has stood up to the task. (www.mchale.net).
The McHale 991 comes with an auto stop function with means once the bale wrapping rotation is engaged the bale will wrap until the number of wraps you desire is accomplished, then it will stop automatically and be ready for offloading and the damper will guide the bale to the ground. This makes for fast and simple bale wrapping 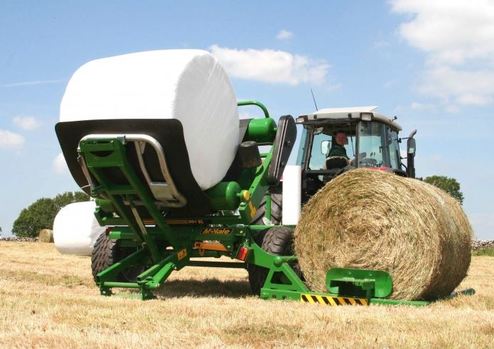 For high output producers, the 991 High Speed Bale Wrapper will increase your production with its speed! As shown in the video below, the high speed wrapper has the great features of the 991 BC/BE units, but with a 50% increase in output. These wrappers will wrap bales in approximately 30 seconds! Some features of this bale wrapper include:
Dispensers: The two 750mm aluminum dispensers maintain a consistent stretch, which maximizes film usage. The dispenser units consist of two aluminum rollers, which are geared to each other with robust steel gears of different ratios. The two dispensers on the 991 High Speed are stepped so that there is an overlap where the two sheets of plastic come together.
Cut & Tie System: The McHale hydraulically operated cut and tie system cuts and holds the film in position ready to wrap the next bale. This time saving device eliminates the need to manually reattach the film.
Wrapping with one Roll of Film: Whether you arrive at a job with only one roll of film or you are down to your last roll:
The operator can manually adjust the dispenser post height to its maximum position using the height adjustment handle. When in this position the roll of plastic can be put on the dispenser closest to the tractor, with this dispenser position the plastic will be applied to the center of the bale to ensure the correct overlap. The operator can then select the “X1” button on the control console and allow the machine to operate as a single dispenser machine.
Read other great options like Control Console, Automatic Film Break Sensors and Damper System. 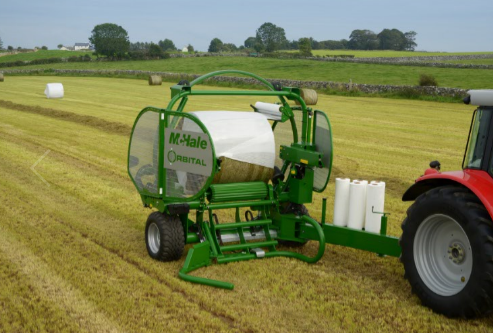 A high speed solution which delivers consistent and even overlap and achieves optimum levels of fodder preservation and quality.