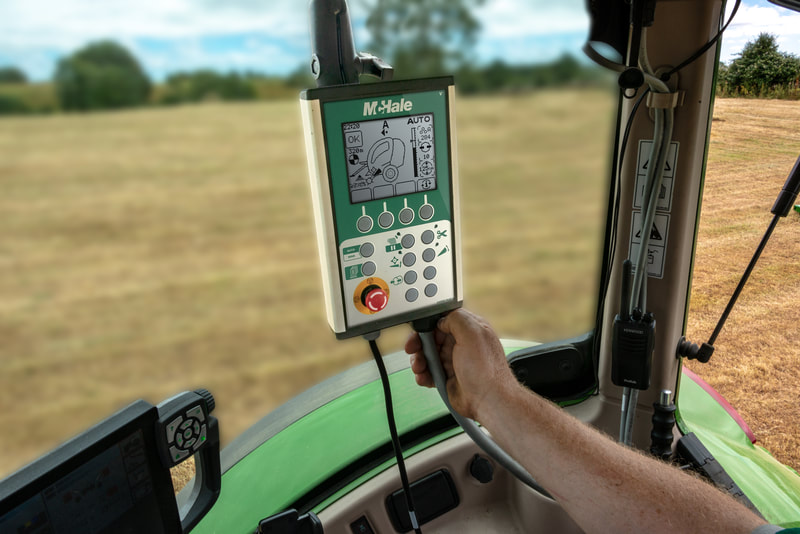 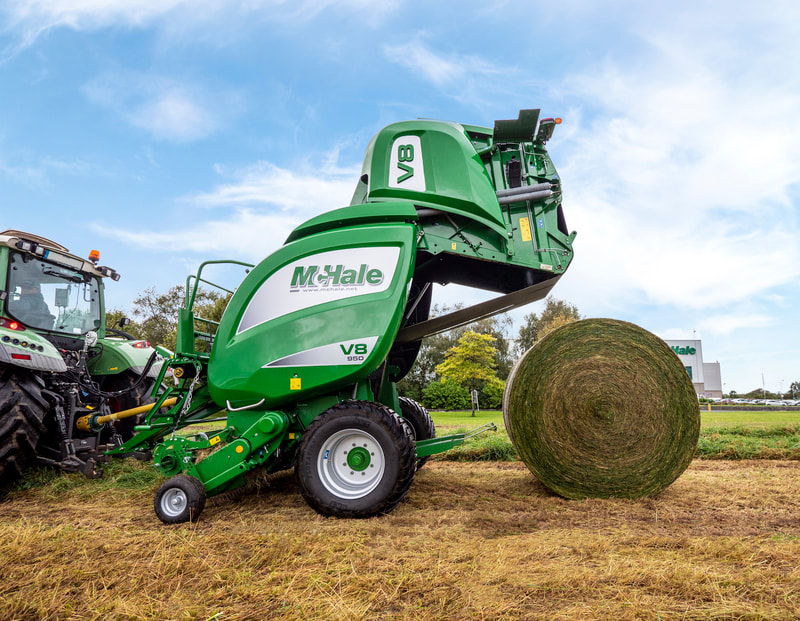 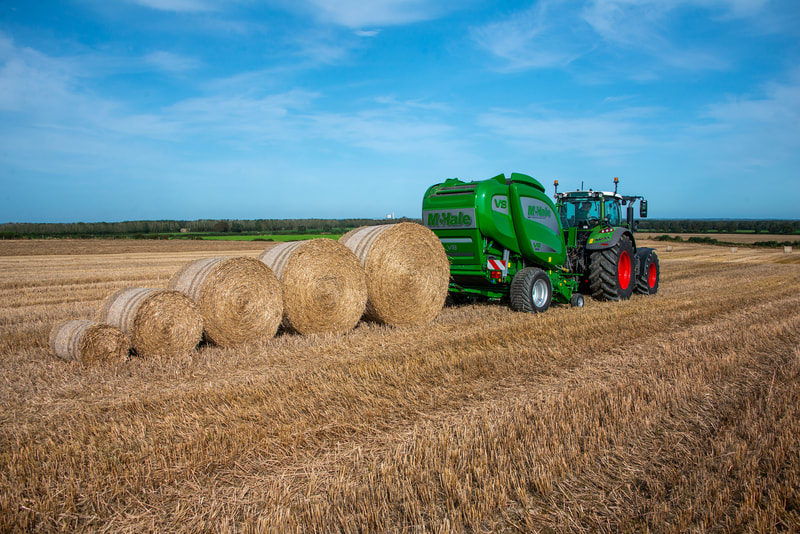 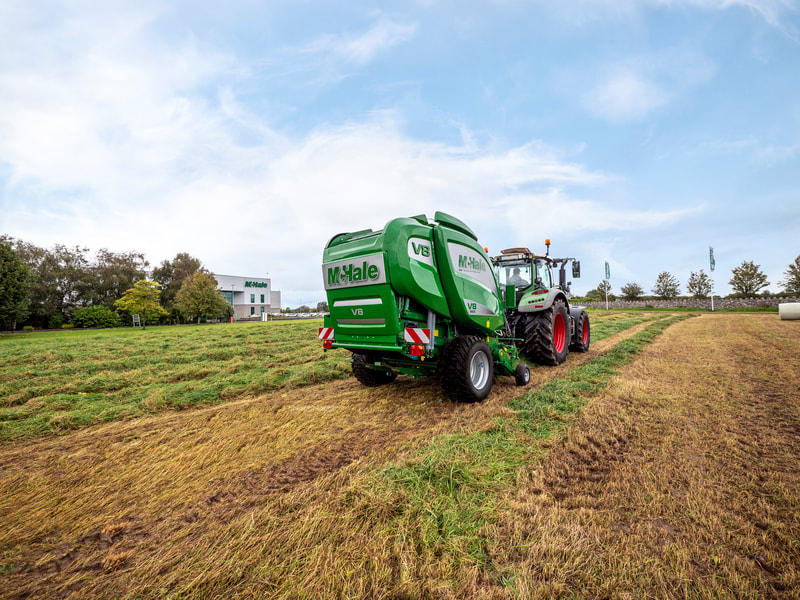 Built to last and developed on some of the world’s most rugged terrain, the McHale range of round balers and round and square bale wrappers is known throughout the world for durability, reliability, innovation and value for money.
As with all McHale machines, the V8 Variable Chamber Round Baler Range has been designed with the demands of today’s farmer and contractor in mind. Having a McHale Baler can even Increase Your Farms Carrying Capacity, read how here.

Bale Sizes
The McHale V8950 is a semi-automatic variable chamber baler which is fitted with a 15 knife chopper unit and heavy-duty rotor. It is equipped with a double drive system which allows the machine to operate in the toughest of conditions. The double drive system aids belt rotation and bale formation. The machine comes with centralised grease blocks as standard. Automatic greasing is available as an option on all V8950 machines. Net and bale density can be adjusted from the cab through the Expert Plus control console. The machine is fitted with 500/50-22.5 tyres as standard
Features Include:
Read Complete List of Features Here. 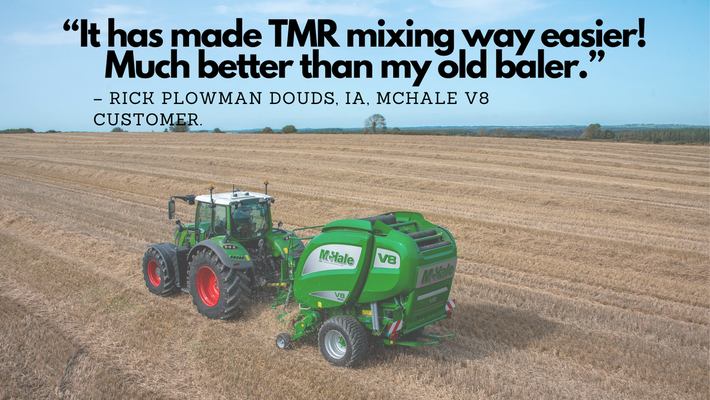 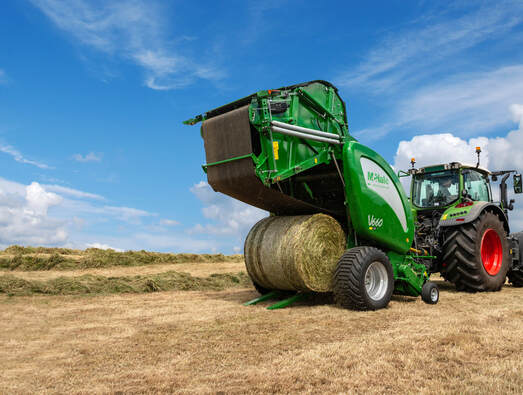 ​There is a high output round baler on the market and customers are seeing just what it can do for their operation. Show Me Shortline offers the McHale V660 & V6750 balers to the Midwest. The McHale V660 & V6750 Balers are 15 knife chopper variable chamber round balers, you can make bales anywhere from 2ft 4 inches to 5ft 6inches. There are three crop type settings that include silage, hay and straw.


There are two main things that set this baler apart from others on the market, and they are big ones. Firstly, the McHale V660 & V6750 is 15 seconds faster at baling than other units. Which at first might not sound like a lot, but if you think about 15 seconds or a quarter of a minute, which equates to a quarter of your day that would be spent simply waiting on another baler to transfer bales out. But with the McHale V660, you can save that time while producing high output, high quality bales.


The second feature that is time and cost effective is the drop floor feature on the McHale V660 & V6750's. If there is a blockage while you are baling, you can simply drop the floor by pressing a button inside the tractor cab, and feed the blockage through and you are ready to go without ever having to step foot outside your tractor! Say goodbye to the days of having to get out and unblock the baler that is jammed with hay.


Another great feature that keeps farmers running in the field and not having to stop when an issue arises is that some of the sensors on the McHale V660 & V6750 are interchangeable so if one goes out you do not have to stop working, you can simply move one sensor you are not using to the one you need, and you are back to baling. This does not happen with most balers. 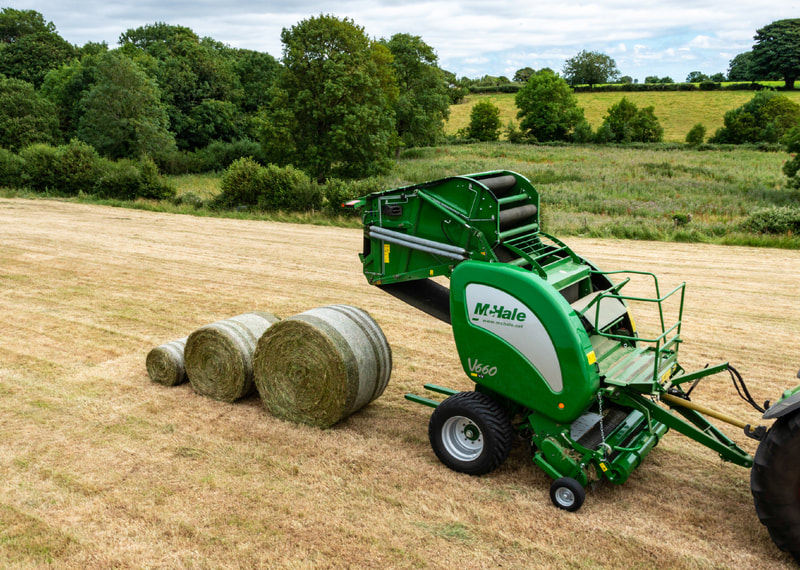 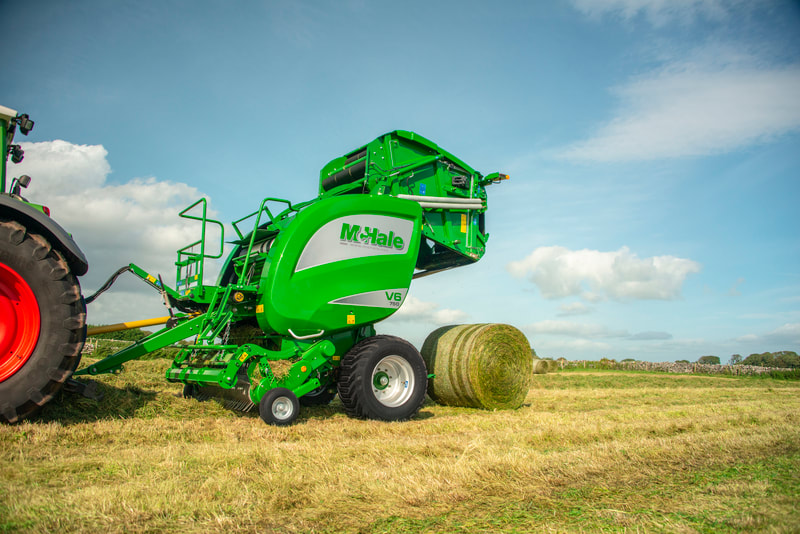 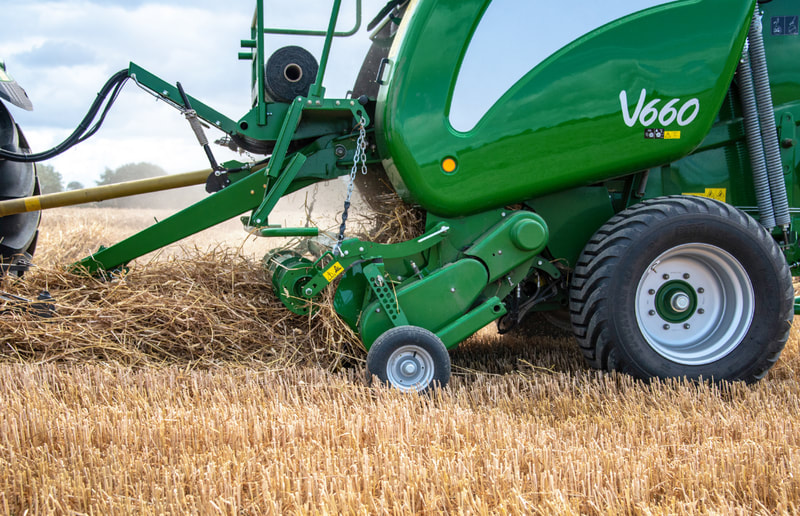 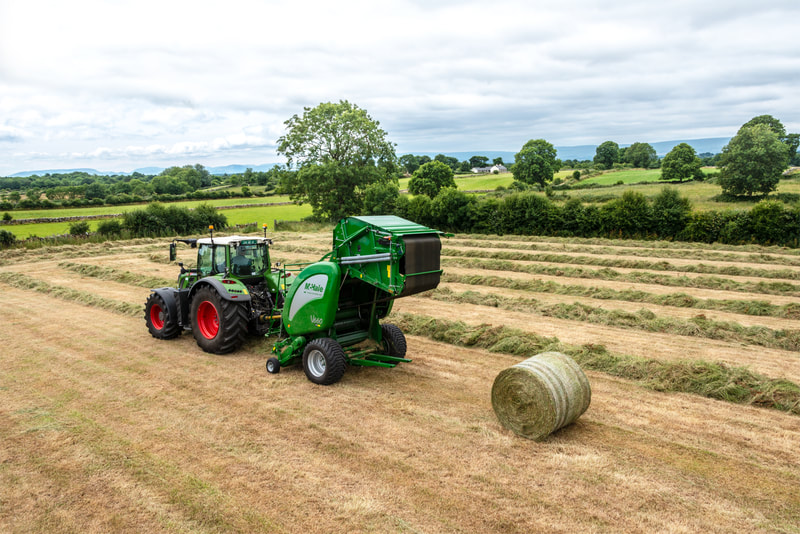 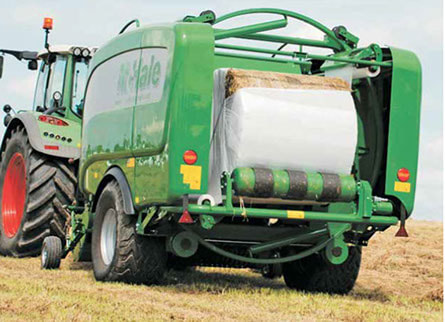 McHale Fusion Vario is a high output baler/wrapper combination that bales and wraps 15 seconds faster than any other unit of its kind on the market today.
The McHale Vario can make bales of haylage/silage of 3ft 3 inches to 4ft 8 inches and bales of hay and straw from 2ft to 5ft 6inches. The high speed transfer system is patented, and what it does is when the bale is moving towards the wrapping ring, the wrapping roller closest to the bale chamber pivots out of the way which reduces the height the bale has to travel to get to the wrapper, delivering the highest possible output.
McHale has a patented tip roller, it adjusts its height in line with the bale size to ensure the plastic always goes onto the center of the bale, regardless of the bale diameter. It also ensures the correct overlap is always achieved. McHale Vario has wrapping features like two wrap dispensers, film break sensors, easy film loading, reliable cut and holds, which gather the plastic to one point.
The Vario wrapping system is high speed/high output and can apply 4 layers of film to a bale in approximately 20 seconds or 6 layers in about 30 seconds. The Vario has a vertical wrapping ring, while some others have horizontal ones.
Other features include iTouch control console that is fully automatic and you can bale, wrap and unload finished bales all from the comfort of your tractor seat and side tip option you can get to place the bales on their end if you wish.
Customers have been very satisfied with the ease of operation, the high output, the features like film break sensors, ability to make different size bales, and the sustainability feature. You can reduce your carbon footprint while you use less fuel, labor, and money by using the same machine to bale and wrap. With other machines, you have to consider the time it takes you when something goes wrong, whereas McHale creates features like override features and some interchangeable sensors that keep you in the field running and not broken down costing time and money 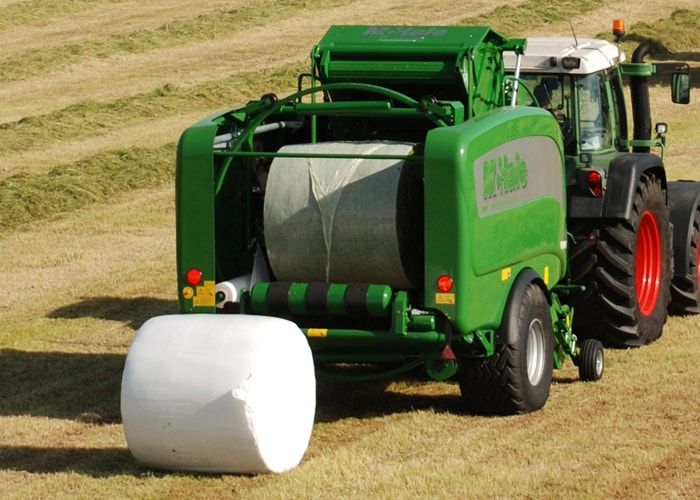 ​The McHale Fusion 3+ is an advanced technology machine that bales and wraps 4x4 bales in one machine. Fusion 3+ has been tested to provide you with the best bales for your livestock.
The McHale Fusion 3 Plus integrated baler wrapper consists of an 18 roller fixed chamber baler and an integrated vertical wrapping ring.

The McHale Fusion 3 Plus integrated baler wrapper uses Film on Film technology to apply film to the barrel of the bale in the bale chamber. Film on Film technology has been proved to increase the feed value of your bales by replacing net wrap with another layer of special film that binds the bale together forming a wrap layer and gives you better plastic coverage on the largest surface of the bale.

The McHale Fusion 3 Plus is a fully automatic machine which is controlled by the McHale iTouch Control Unit and also has an inbuilt camera to monitor wrapper operation.